No piece of clothing dispenses more metaphorical wisdom than a pair of shoes. Perhaps it’s a symptom a world made only for the well heeled. But if you want to make something of yourself, you’ve got to pull yourself up by your bootstraps, as it were.

A young veteran of men’s clothing and accessories, Christian Kimber pulled himself from shore to shore, growing up in London, understanding the nature of good a good suit from his father, refining the art in Savile Row, and pairing his self-taught shoe designs with night school classes in pattern making before discovering Melbourne. Ultimately came the launch his footwear designs. First came the success of his classic line of derbies, loafers, and the odd boot, all crafted in Spain. Crossing over the skill of shoemaking, Christian has unveiled his first Italian-made sneaker series, Passport, as an embodiment of his own multifaceted style.

“This collection represents the idea of blending different clothing genres together, with these kicks and my other products fitting as seamlessly as the stamps in your passport,” explains Christian. “There are elements of menswear, workwear and streetwear because I grew up loving one, followed by the other.”

As the sole visionary of his brand, every seam and contrasting detail began with Christian’s pen on the paper. Therefore, elements of his journey come out in every pair, creating soles with soul.

For the inner urbanite, Christian designed the Cumulus and the Siglo for high and low pursuits through Melbourne concrete. Understated and refined, the Siglo represents its namesake, Christian’s go-to city bar, free of signage, celebrated in dignity. Similarly, the Cumulus, named after his favorite breakfast spot, features an undulating stitch in the back to mimic the winding cobblestones its wearer must traverse to earn a seat at the brunch counter.

Miles from concrete corners and symmetrical guidelines, The Passport also breathes salty with two organic dynamos of the seaside: the Lorne and the Byron. The Lorne is a slip-on to complement the breezy beach life of the Victorian town it was named after. For a closer connection to the shore, the Byron is a sunset realized: a wave, the pattern it prints upon the sand, and the burgundy sky of a runaway sun.

Whatever mood suits you, and whatever setting adventure has called, Christian encourages you to beat life into these shoes. Just flip through Passport Collection’s lookbook for a glistening pair of white high tops. Because you won’t find them.

“There’s no point having beautiful things if you don’t use them. I want our clients to wear these shoes to death and love them so much they come back to see what’s new. Our model wore his own dirtied up pair because worn shoes just look better. Nothing is to be pristine forever. I used white suede for a reason: it’s a fabric that commemorates its journey.”

What is it to bring your vision to fruition? To speak your language of shapes and colors? To draw from your life into a life’s work?

Walk a mile Christian Kimber’s shoes, and you’ll get an idea. 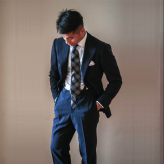