Pitti Uomo 88 was summer time in Florence. The bustling of people, sounds of rekindled friendships, joyous celebration and handshakes to be seen left and right. From an outsider’s perspective, this looks like a carnival, a true spectacle of style. Bright colors, fabrics in all shades and shapes. Men, in dapper uniforms. But what does this all mean? Perspective solely rests in the eye of the witness, so then what of an Artist? Soosan Joon was kind enough to share her thoughts on the visual spectacle this past June (pun not intentional) through a collection of paintings. In four parts, she focused on the things rarely seen, starting with a bird’s eye view. We begin with the scene, the “Pitti Pit” from a view most who aren’t there, just never get to see. Perched from above, Soosan watched as people shifted and made their way through the jumble, pausing for photographs and smiles. It’s a lot to take in, so many pieces of this image ingrained in the mind, but what of the smaller elements of this parade? What happens when you come down and immerse yourself amongst the people? Next week we will see just that.

The inner workings of these tiny machines are so intricate, you would think you were in a watch factory watching them produce each hand assembled, hand mechanized tool. Edelbergs aren’t just pens or works of art, they are pillars of engineering, packed neatly in something we used to need a feather and ink for. We will touch on this note sometime soon, but for now enjoy the beauty which is the amalgamate of art and artistic ingenuity right here.

Fabio Attanasio, or as most may know him as Fab from the Bespoke Dudes or general style icon of my generation, decided to produce footwear with some elegance. Blake -Rapid stitched, comfort and a great finished with some patina, the overall look is refined and subtle. But features aside, there is something very important happening here. Fabio is focussed on the rebirth of Made in Italy, a lifeline for the downturning economy. As he put it “…we want to show the fundamental importance of craftsmanship and Italian creativity…” That is something worth thinking about, worth the time spent, and definitely a nod from us to him for trying to make the world a more beautiful place to walk in.

Given the current economic circumstances in Greece, Vassilis Bourtsalas has set himself apart in a place that to be honest isn’t exactly interested in the luxury of bespoke for the moment. Yet, despite the odds, Bespoke Athens’ doors remain open and thriving. We had the pleasure of meeting Vassilis during Pitti Uomo, and he invited us out to his retail space. A hop, skip and jump away from Florence and equally as beautiful and rich with cultural underpinnings, the decor of the shop is, well, expertly tailored. Every detail of design encompasses the larger scope, a pride in craftsmanship and penchant for effortless style. Heritage is always vital, but no where moreso than here, during a time in which looking ahead can be difficult, but remembering the past is all too important.

Mr. SartoriaMerta as you may know him, with a penchant for fine things and well cut suits, also has another side you can’t quite see (or smell) on an Instagram post – he has the most diverse fragrance collection we’ve ever seen. Khaled Nasr doesn’t boast about it or anything, but we think he should. Just the shear size of it would be enough to talk about, but considering the diversity of some of the rarer finds, and some of the world’s most beautiful fragrance bouquets, you’re looking at something a bit more special than that. 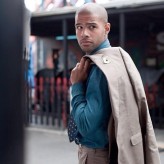