It’s that time again! You know, when photographers suddenly dump a shmorgishborg of street-style shots on their websites from back here in the states (Europe trips are over, finally- it’s time for Americano). Hopefully you’ll have just enough inspiration to get you to Spring (please, let the internet educate rather than dress you). It’s easy to get caught up in the mix; wanting to get a bit of internet stardom that a Scott Schuman cover-shot can get you. I went through it on my first trip to PROJECT. For me, it was a chance to meet many of those who trade industry jargon over twitter and stop living vicariously through my computer. I left with friendships, relationships, and a new respect for the mens trade-show.

The fact of the matter is that PROJECT NYC is a highly successful men’s trade-show showcasing designers from all over the world in one spot. It serves as both a business and a creative platform for the masses. Consider it our “Apple Convention”, Menswear is having an un-denaible moment right now. We are finally starting to look at clothes the way men look at sports, cars, and other hobbies (Mr. Tyler Thoreson). Pay close attention to the media- celebrities are wearing some of our favorite designers. Commercials are featuring men rocking what seems to be that perfect “Americano” look. A whole new breed of men is stepping to the plate and starting to truly care about not only the way they present themselves, but how they live their lives.

This year marks the inaugural joining of the forces between PROJECT NYC and ENK.  Renamed PROJECT NYC, the even takes place January 21st-23rd at Pier 92 (52nd Street at 12th Ave.) The spotlight now shines on our work here in the states. This is a great time for the international community to admire our work, looks, and collections.  Next Tuesday, buyers, bloggers, and photographers will get their first look at many of the “Americano” trends for the season and report directly back to the general consumers and readers alike. New this year to PROJECT NYC include Closed , Raleigh Denim, and W.R.K out of NYC. With more than 200 brands attending this year, you’ll have enough cotent to last you a while. Up in NYC for Project? Send us a report, pictures, updates to @AandHmag on Twitter! 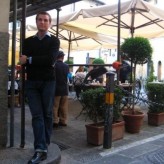