A loop of time, a place where reality has a peculiar taste, where the past and the future share the same narrow streets with old facades and bohemian students and where the silence is so easily loved, as it is difficult to decrypt–this is Sibiu, the medieval Romanian town with German flair.

Located right in the heart of Romania, in Transylvania, an area surrounded by charming landscapes of rugged mountains tamed by gracious rolling hills and icy streams flowing out of nowhere, there’s no wonder Sibiu is one of the destinations Romania cherishes the most.

Also known as Hermannstadt, due to its German and Austrian influences, Sibiu is actually a deeply multiethnic, multicultural, multicolor and even a cosmopolitan city, although its size doesn’t exceed much that of a village and that tends to be one of the most wonderful things about it.

Sibiu features a parade of architectural styles giving you the chance to actually travel through time while roaming the streets. With gothic, neo gothic, and baroque buildings sprinkled around, it’s almost incredible how this tiny medieval city has never lost its uniqueness, consisting mainly in its deeply Romanian soul.

Thirty-nine defensive towers, numerous bulwarks, gates, and artillery batteries have helped Sibiu to slip through history without ever being captured. Now, after two World Wars and many decades, not even the unforgiving passage of time has succeeded in stealing its distinctive charisma. On the contrary, Sibiu’s olden charms never fail to enrich any visitor’s experience.

Through the Eyes of a Tourist

A tourist would see Sibiu divided in two different sides, the Old Town-one of the best preserved historical centers in Europe, and the other relatively new side, emphasizing an elegant mid-sized Romanian city. Then he would explore its museums, perhaps the most concentrated collection of cultural shelters in Europe.

Starting with Brukentlal, the first ever art center built in Central and Eastern Europe and the second on the continent only to Louvre, the tourist will visit at least 10 museums until he’ll finally reach the ASTRA National Complex, a fabulous open-air display of epochs depicting Romania through the most accurate spacetime concept.

In an attempt of soaking up the atmosphere inside the citadel walls of Sibiu, the tourist will take a stroll on the narrow streets, impressed by the tunnels, bridges, and passages of stairs that connect the city’s wonderful squares. He will take dozens of pictures and then, overwhelmed by the artistic appearance of Sibiu and the events galore, the tourist will probably stop by one of the ubiquitous sidewalk cafés, for a cold beer and a traditional meal, watching the world go by.

After a while, the trip will eventually come to an end, the tourist will leave Sibiu like any other passerby, with a peaceful heart, a vivid memory, and a crazy desire to return one day, because this is Sibiu, a city that offers, but not without retaining a piece of its visitor’ soul.

Through the Eyes of a Local

Young or old, rich or poor, any local in Sibiu talking about his home city could easily be mistaken to an artist. From any angle you look, Sibiu urges you to dream, to create, and to develop an incredible sense of beauty.

The local of Sibiu wakes up every morning with the same spark in his eyes and the same happiness for living in the most beautiful Romanian city. Then, he heads over the narrow streets, paved with flagstones, led by a charming boemo-medieval perfume all his way to work.

Crossing the Great Square, he is reminded of his youth when a Viennese-like society used to come here in order to cool off under the blossoming trees, when white-dressed ladies wearing lace gloves and wide-brimmed hats went out for an innocent flirt. Things haven’t changed too much, though. Except for the black toppers, which flew with the time, the world here still knows how to absorb art like a sponge.

In the afternoon, the local returns from work, and with the same serenity, he passes by the souvenir stalls and the bohemian artists in the Little Square. A young painter greets him politely from the Passage of Stairs. He smiles, and living behind the Liars Bridge, he turns right through a small burrow, arriving in the Great Square.

The sun glides over the imposing Roman Catholic Church while a concert stage is arranged in front of the Brukenthal Museum. A group of young girls laughing breaks the silence, melting his memories into history. Stepping randomly he realizes that Sibiu has kept a living spirit of the place over the years due to the architecture’s palpable presence in the community life.

He knows that the magic of Sibiu stands in its beauty as much as it stands in its residents’ fondness and it will last in the same perfect symbiosis forever.

He stops at a wooden terrace where his friends are having a beer. Next to him, a group of young German tourists are taking pictures with a beautiful Romanian waitress. After a while, he goes home, happy, gratified and forever in love with the city he lives in.

A city treasured by both locals and tourists with the same unconditional love and  whose Saxon medieval charms and multiethnic identity brought it on Europe’s highest cultural peaks, has nothing more to show off as it is already embodying  Romania at its best. 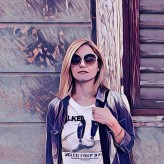