“We’re in between the avant-garde and the classic… Balance is what it’s about.”

Owner, head-designer and creative director Aaron Black has carved out a signature space on Mulberry Street. The bespoke brick and mortar shop opened in 2012, providing full service made-to-measure suiting, limited run ready-to-wear options as well as a host of accessories. Black’s sartorial philosophy embraces traditional techniques and historical details while infusing modernity through unconventional design. His expertise lies in sorting through the history of menswear, offering the familiar shapes, then tastefully toying with details like lapels, proportion, pocketing, belting, lining and accouterment. The result: a

Aaron Black’s path to becoming a fashion designer was unexpected and unorthodox, and White Chalk is, in many ways, his life’s work. Born and raised in and around London, he took to graffiti and hip-hop in the 1980s. After art school, Black worked retail for the likes of Browns, Comme des Garçons, Joseph and Nicole Farhi and Agnès B., learning the trade along the way. His drew inspiration from the punk rebels of fashion, among them Jean Paul Gaultier and Vivianne Westwood.

Then, he explains, a shift occurred: “Helmut Lang was pushing boundaries and Dolce & Gabbana was playing with an aesthetic of a larger jacket and tapered pants.” Black developed a taste for vintage clothes, collecting obscure British labels and learning to appreciate tailoring as an art form, not just a means to an end.

After his stint in retail, Black went into public relations which eventually led to an assistantship with Jo Phillips, Creative Director at Tank Magazine. From there, Black went on to style menswear for brands such as Paul Smith. He recounts: ” [as a stylist] I became disenchanted with that side of the industry. I was mellowing out by this point.” Eventually, Black left that arena, moved to NYC and started playing in a band.

He was finally encouraged to to re-enter the industry after designing a suit for a friend, then a handful of private clients. Over time, he rediscovered his passion. Momentum and word of mouth grew and White Chalk was born.

Black describes his brand in dichotomy: “We’re in between the avant-garde and the classic, making it modern and wearable without being vulgar. Balance is what it’s about.” The pieces not only capture the essence of several eras but also several personalities. “I wake up everyday and I’m someone else. I might be dark, edgy, colorful. I wanted to make clothes that allow anyone who feels the same to express that.” And he has held fast to that vision.

Black brings an international experience to the crossroads of the world, with a quality that is second to none (fabrics are imported from the historic Holland & Sherry Mill). The minimalist interior– black floors, white tiled walls and a recreation of the NYC subway station ceiling– mimics an art gallery, keeping patrons focused on the pieces and unencumbered by the woods, leathers, exposed brick and taxidermy that bombard other boutiques. He seems to curate as much as he creates. 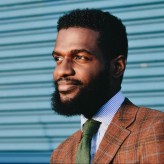