The beauty of Venice was not always in the most popular places such as St. Mark’s Square or The Grand Canal, but hidden deep in the maze of alleyways and canals that make up the city. Getting lost was one of the most fun things about  Venice. Wandering through the canals and alleyways became a game of discovering hidden churches and architecture that the usual tourist might not find. Taking bridges to new parts of the tiny island and discovering a new part of the city that you won’t find in the guidebooks became part of that game as well. Of course I did the touristy stuff and visited St. Mark’s Square and the Rialto Bridge, but to me I would rather find stuff that you won’t likely find if you don’t stray off the beaten path.

I have to say I did spend alot of time at the Rialto Bridge, especially around 20:00 when the sun was setting over the Grand Canal. The colors shining off the Grand Canal and buildings surrounding the Rialto Bridge seemed to glisten and shine in a certain way during sunset. My advice, grab a bottle of wine and just go sit on the edge of the canal and just admire the beauty happening before your eyes.

There was not one thing that I didn’t like about Venezia. Each little aspect of the city painted a vivid picture of the beauty that this island city in Italy had to offer. Seeing the famous gondolas with a backdrop of the Grand Canal and the beautiful architecture lining the canal is definitely something you have to experience for yourself. 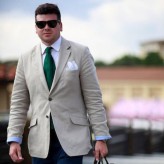